This is the dawning of the age of Aquarium... AQUARIUM! 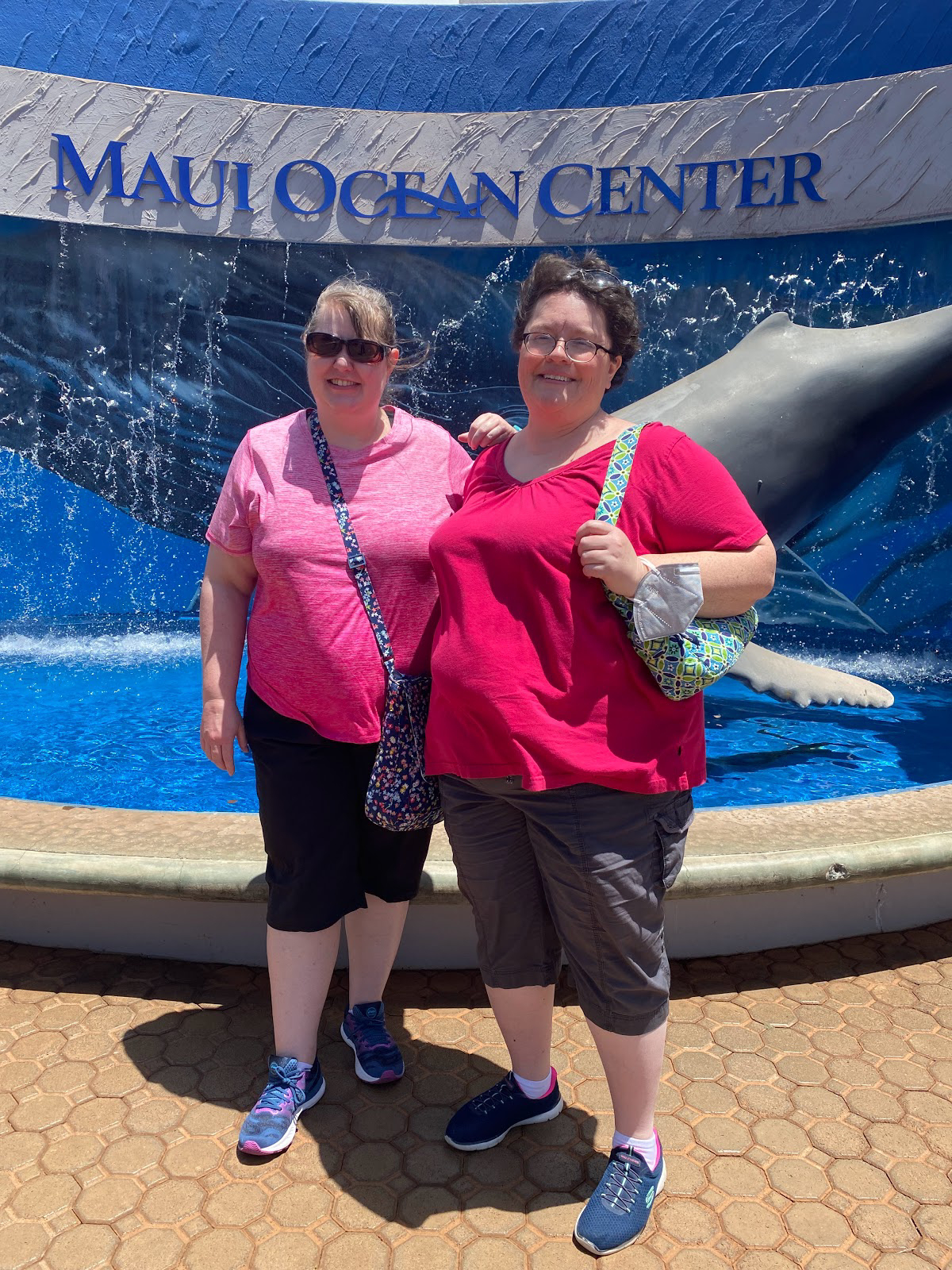 We spent Easter Sunday morning at the Maui Ocean Center, the Aquarium of Hawaii.  I realize now that I'm really out of practice on the travel blog front. I usually have my laptop so I can really type, but I just have my tablet. Maybe I'll go back in and add more detail when I get home. But for now... We spent a lot of time in the reef exhibit and took roughly one million fish photos. I also took photos of the explanations so I could explain things here, but again, easier on the full computer. At any rate, the fish were stunning, and wild, and weird, and interesting.  After the reef, we were starving so we tried to pop into the restaurant. There is no popping. We put ourselves on the 75 minute waiting list and moved on to the turtles, baby sharks, and open sea tunnel, complete with mana rays and adult sharks.  Hunger got the best of us, so we opted for the café
Post a Comment
Read more 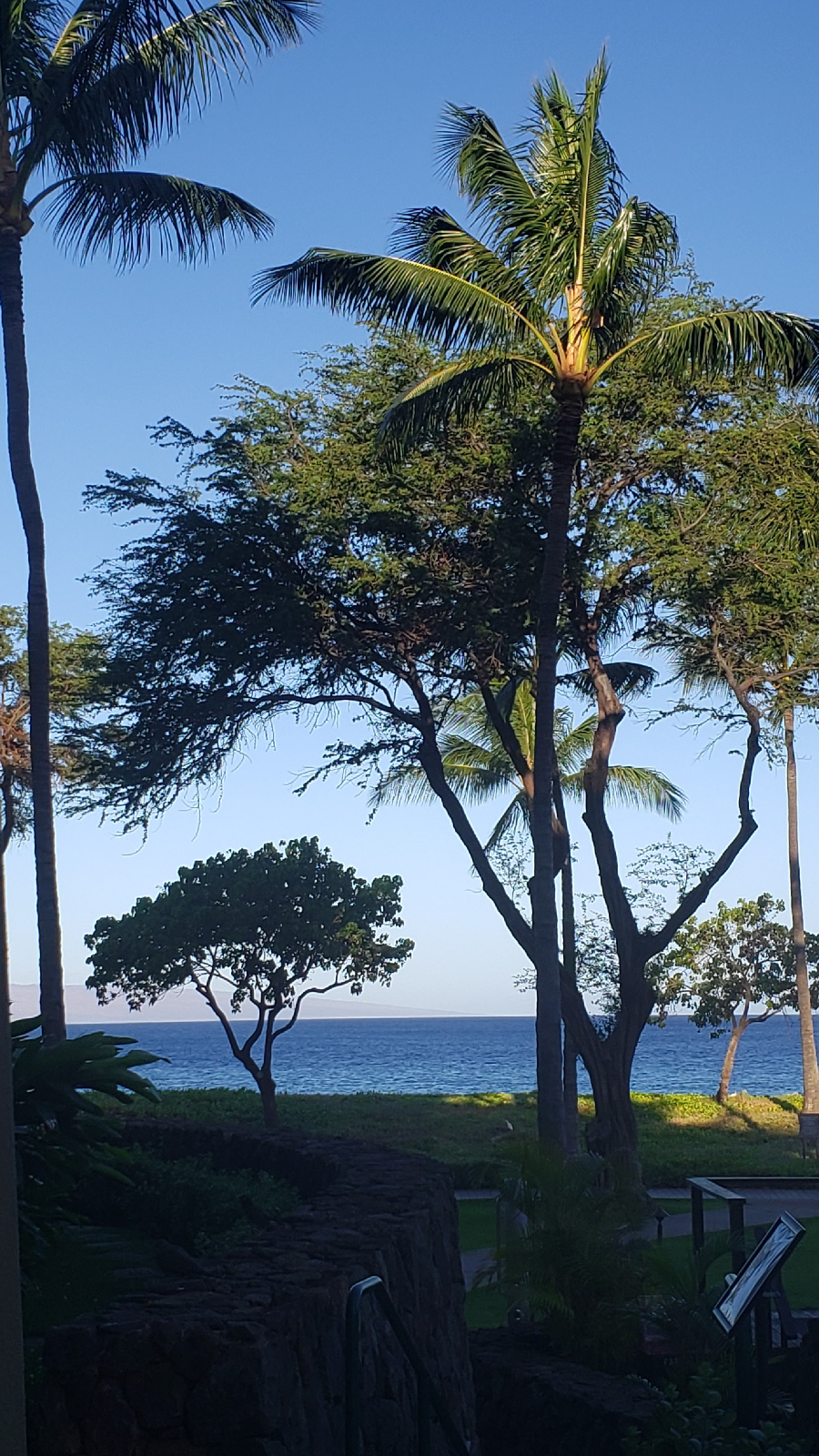 How sad is it that it's been so long since I've traveled that I forgot I have a travel blog?!  I'm with my college friend Amy in Maui, my first real vacation since COVID shut us all down in March 2020. This is my first trip to Hawaii and we're just beginning our second full day... and it's Easter Sunday!  Looking out from our room, it looks to be a beautiful day. We started the morning with lavender scones and Maui Pie coffee from yesterday's outings. I'll back post about those activities later.  Today we plan to visit the Maui Ocean Center aquarium, a lighthouse, a beach, and possibly a farmer's market. Stay tuned!
Post a Comment
Read more

A couple of weeks ago, I mentioned that I was in Schenectady for a PRSA meeting, that I took pictures, and that I'd share them later. Later is now. Schenectady is one of those towns I've always heard of but don't know why. I just remember the name, but not why the place might have been significant. Maybe it's because Grace Adler was from Schenectady, but I doubt it. All of the other popular references are ones I wouldn't have known, but I can't imagine that I paid attention that closely when watching  Will and Grace . Regardless, I knew the name before I moved here. It's about a half hour drive from our house to the downtown area of Schenectady, where we have had lunch, enjoyed a show, and I have had some meetings. It's a cute downtown area, with historic buildings along a very walkable main street called State Street. The place where we had our PRSA event is called Urban Co-Works. It's an interesting flexible office space that allows no
Post a Comment
Read more

Back Roads of Massachusetts

As I was leaving Holland this morning, I checked two boxes on my GPS settings: Avoid Toll Roads and Avoid Highways. It was time to see a little countryside. One of the things I wanted to make sure I did this time was stop and take pictures of this church in Palmer. It is my favorite building on the way to my friends' home, and I have never taken the time to get a photo. St. Paul's Church was founded as a Universalist congregation in 1876. I guess I just assumed that it was something else first, but after looking into the history I found that it has always been a Universalist congregation. The church building was built in 1879 out of Monson granite, quarried just a few miles to the south of Palmer. Rather than turn north at Palmer to get on I-90, I continued through the town and its historic homes to take Highway 181 toward Bondsville. Passing white-washed fences that skirted red barns and silver-gray silos, I took in the charming Massachusetts countryside. As I near
Post a Comment
Read more 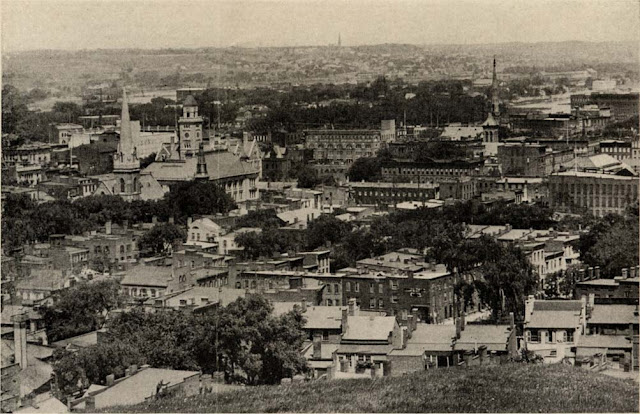 Originally posted on my Quest blog . I've been working on a new brochure for the  Troy Irish Genealogy Society . In the process, I've been looking at old photos of Troy. This city is one of the most interesting ones in this area, in my opinion. Looking at the skyline from the Hudson River is like stepping back in time. The church spires tower above a crowded matrix of row houses and historical 19th century buildings. It looks much like this, even today. View of Troy from Mount Ida (I think) This afternoon, I was going over to Troy to register for a drawing class at the  Arts Center of the Capital Region , a gift from Kef. As I was sitting at the stop light to turn right onto River Street, my eyes were drawn to the Market Block building rising up at the corner of River and Fulton. The light changed, so I couldn't take a photo, but you can see it  here on a Google Map street view . This amazing structure is characteristic of many buildings in the  Central Troy Histor
Post a Comment
Read more

Originally posted on The Quest blog. Our destination this beautiful July holiday was the Christman Sanctuary, a nature preserve near Duanesburg in Schenectady County, New York. The land was, as you might guess, donated by the Christman family. The earliest map I could find that included landowners' names, the  1866 Stone & Stuart , shows the land belonging to S. Christman. I found that to be Spencer Christman, father of William Weaver Christman, in whose memory the land was donated (by his youngest son, Lansing Christman). According to the obituary on  Find-a-Grave , Spencer Christman purchased the land in 1848, where he farmed, raised his family, and died at the age of 86. This line from the memorial gives you a glimpse into the life of this family's patriarch: "His integrity, his sterling Christian character and his kindliness of heart won for him from a wide circle of acquaintances, a place not easily filled." William Weaver Christman, Spencer's son, wa
Post a Comment
Read more

There are many historical sites in the Capital Region that I've wanted to visit. Today, I was out in Albany Rural Cemetery doing some headstone photography. As I was wrapping up my work I noticed the Pruyn family headstones. This reminded me that I had not yet visited the Pruyn House , a historic site that's just down the road from home. So, rather than going straight out of the cemetery to go home, I turned right and made my way to Pruyn House. (For those of you, like me, who are not accustomed to seeing "uy" in names, it sounds like a long "i"... so imagine that the name is spelled "Prine House" and you'll be pronouncing it correctly in your head.) This home was built between 1825 and 1830 on land owned by the Van Rensselaer patroon. The home belonged to the patroon's land agent (i.e. rent collector), Casparus Francis Pruyn. He was the sixth generation of Pruyns to live in America, the first having arrived in the 1660's. Althou
Post a Comment
Read more
More posts

Melissia
I'm a genealogist. A communicator. A creator. A writer, artist, musician. A dog lover. An introvert. A chronically-curious blogger.